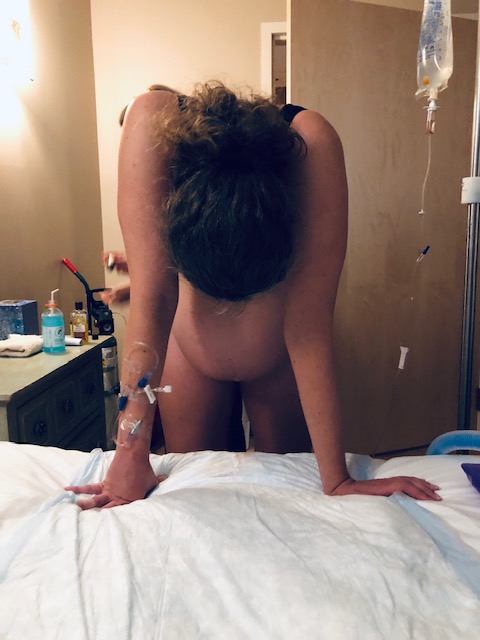 Quick recap of Atlas’ birth, she came out acynclitic, which means she was turned to the side instead of facing my back. This resulted in 19 hard and painful hours of back labor with her so I wanted to avoid that all costs. Here’s her full birth story for your reading pleasure.

Once you hit 36 weeks, you start visiting the midwives weekly and during my previous appointments, this baby still wasn’t in the optimal birthing position. Yes, most babies who aren’t in the right position will still turn before birth but I also knew Atlas got a bit ‘stick’ inside of me. So I did A LOT of things to attempt to get him in the right position.

What I did  to avoid the awful experience of back labor :

It’s Monday afternoon, July 15th and Atlas wants to go swimming. We take her to our local rec center, where I proceed to float on my very pregnant stomach for a solid hour, trying to get this baby to get in the right position. Afterwards, I’m changing and feel some moisture coming out of my nether regions (don’t worry, I’ll be using the word ‘vagina’ a lot more shortly).

Any woman who has been swimming knows that your vagina kind of turns into a water pocket so this wasn’t too much cause for concern.

My water never broke naturally with Atlas so I wasn’t totally sure what that might feel like. I have no other symptoms of labor and I’m only at 38 weeks so I figure I have a larger water pocket now thanks to giving birth previously.

The next morning I wake up and my underwear is sort of wet but not a ton. It’s slightly tinged with color but nothing shocking. Let’s be real – it could very well be pee because that’s also a thing that happens after you’ve given birth vaginally. Your pee betrays you.

Ryan goes to work out so Atlas and I wake up and get going. More fluid is sort of leaking out but again, not a ton. At this point I know it’s not my bladder betraying me. Ryan walks in the door and I’m like “Oh hey. How was your workout? Pretty sure my water is in the midst of breaking. What time is your flight tomorrow?”

Thankfully now it’s Tuesday and Atlas goes to school on Tuesdays. He drops her off and I call my mom to let her know she may be on Mimi duty so prepare to pick Atlas up and potentially bring her to the birth.

I call the midwife on call and tell her what’s going on. She says I should come in so they can do a test to make sure it’s amniotic fluid and not a prankster bladder.

Ryan and I meet her at our birth center at 10am. Her name is Sophie and she was on the short list of the midwives I hoped to get so yay! She does the test, which is either a vaginal swab to put on a test strip or can test it on your underwear/pad. If memory serves me, the test strip turns blue if it’s amniotic fluid. Mine turned blue.

This meant she would start my ‘time’ at 6am that morning, when I woke up. I was now on the clock because you have 36 hours to get into active labor and still be able to birth there vs. a hospital. Well. I didn’t have 36 hours. My dear husband booked one, last final keynote on July 18 and had to leave July 17th to ensure no travel hiccups. His flight was due to leave in 20 hours.

She hooked me up to the fetal stress test machine to make sure baby was healthy and happy. Thankfully, we were both all good! She also checked my cervix and asked if I wanted to know how far along I was. At this point I was 1.5cm (out of 10cm for a baby to come out) but I wasn’t too worried because I had zero contractions and no other signs of labor except for leaking amniotic fluid.

Sophie asked how aggressively I wanted to try to get things moving. Since now the clock was ticking on when Ryan had to LEAVE THE STATE OF COLORADO AND ME, I said very aggressively. She started me on Cotton Root Bark and I would take it every 15 minutes for an hour then an hour off. Then one more hour of it. She also recommended I try to get in to see my acupuncturist and thankfully she had an opening.

The midwife said that if I’m still not feeling much, then take castor oil at 3pm. I wasn’t really hoping I wouldn’t have to do that.

Ryan and I go to my acupuncturist and I explain what’s going on AND that baby still isn’t in the best position. She works her magic on me to help induce labor, get him to turn and to calm me. Then we do some stair work in a very public stairwell to get my pelvis to open up. That was fun.

Side note and hilarious story: I’d been seeing her since before we left for Australia and talked to her a lot about our business and my husband, the keynote speaker. She had never met him but needed to ask him to go get my Cotton Root Bark. She said she was excited to see what he looked like because she had a very clear image in her mind. When I asked her to describe what was in her head, she said, “I picture someone older than you, that looks very scholarly – like with thick framed glasses and sort of a graying beard.” I had a VERY good laugh at this.

I said, “Oh no Anita. You will be very shocked when you meet him. He’s pretty and young and very well kept. But he does have glasses.” HAHAH.

Ryan said when she came out he looked like a full on teenager, laid out on the couch with a baseball hat and bright red tennis shoes, watching YouTube videos (I was in there for 1.5 hours).

Ah. I still randomly laugh at this.

We leave and I see a SteakNShake. Mama knows I need to eat since birth is an endurance sport. Hamburger and French fries for the win. Then I remember my midwife saying that it’s not actually the taste of castor oil that people hate – it’s the consistency. She recommends either mixing it with a milkshake or mixing it into a tequila sunrise (seriously, midwives are the best). I’m lactose intolerant so I figure, if castor oil is going to clear out my intestines should I get to that point, I might as well have a milkshake while I’m at it. Castor oil is a powerful laxative and I’ll leave it at that.

We get a milkshake too and bring it home in case the castor oil has to go down my hatch.

Now it’s about 2:45pm and I still feel 100% normal except needing to change a thin panty liner that has a minimal amount of fluid on it. I’m having some Braxton Hicks contractions, but I’d been having the same pressure ones since I was like 33 weeks so no real change there.

Ryan is hanging out – trying not be stressed about leaving for a trip. He’s due to be the closing keynote for a massive conference so it’s not like he could simply call in and not show up. He thankfully found a flight that left at 8pm July 17th instead of 6am that morning so that helped us both feel better.

He’s keeping our doula Merrie in the loop too.

Now it’s time for the castor oil since my body is still indifferent to the fact that this baby needs to be born sooner than later. I blend about half the milk shake and 2oz of castor oil together. The castor oil is the consistency of caro syrup, so thick it makes molasses look like water. I decide to drink it all in three large sips, which seemed so smart at first.

It was awful. It didn’t really mix well because again, it’s so grossly thick but I get it all down. Then I feel awful. I have a decent of amount of chocolate milkshake and castor oil sitting on my stomach and it doesn’t feel great. I go to lay down and then start crying because I’m freaking out that Ryan is leaving the next day and I really hate the anticipation of things. It wasn’t fun to sit around and wait for contractions or back labor to start.

Ryan does his best to console me.

By about 4:45pm, I start to feel some rumbling in my stomach. This means the castor oil is starting to work and I start to feel sick. ‘Powerful laxative’ pretty much sums up castor oil’s effects. I start feeling slightly stronger contractions but still nothing like I’d be starting labor soon.

Ryan calls Merrie, our doula, and lets her know that I’m starting to feel some things. She’s already on her way and gets there about 5pm. By 5:15pm, the contractions are starting to get more regularly and slightly stronger. I’m still feeling relatively okay, except for needing to be close to a bathroom and feeling a bit nauseous.

Merrie spends some time with the robozo thing trying to get baby into position. I start feeling some pressure in my back (nooooo, I did ALL THE THINGS TO PREVENT THIS). Merrie has crazy strong hands that serve as excellent counter-pressure.

Ryan calls the midwife again and let’s her know things are starting to pick up. My contractions are about 10 minutes a part. I head to the bathroom yet again and am starting to feel pretty nauseous and my contractions suddenly feel super strong and painful

This site uses Akismet to reduce spam. Learn how your comment data is processed.