Surprising Your Spouse with Your Second Pregnancy

It’s amazing how different a second pregnancy can be, even from the moment the pee stick is positive.

With my first pregnancy, my husband was right by my side whenever I took a pregnancy test. In case you haven’t seen it before, here’s the video of us telling our families!

As we were planning for this second kid, I asked him if he wanted to be surprised or take all the tests with me like last time. This man LOVES a surprise so he agreed to a surprise if these rules were followed:

I took a few negative pregnancy tests earlier in the week and he was with me for those. I’d had this weird taste in the back of my mouth for about 1.5 weeks. When I was pregnant with Atlas, my mouth tasted like cinnamon gummy bears for weeeeks before I finally got a positive test. This taste was different – sort of sour and metallic and gross.

During the day of Thursday 11/15/18, we were at our Entrepreneurs group and my pants felt horribly tight and uncomfortable. I have a lot of gut issues so I assumed I must have eaten something that makes me bloated.

When we got home, I decided to take another pregnancy test, even though I took one Monday and it was negative. I took it right before Atlas went to bed and BOOM – POSITIVE. 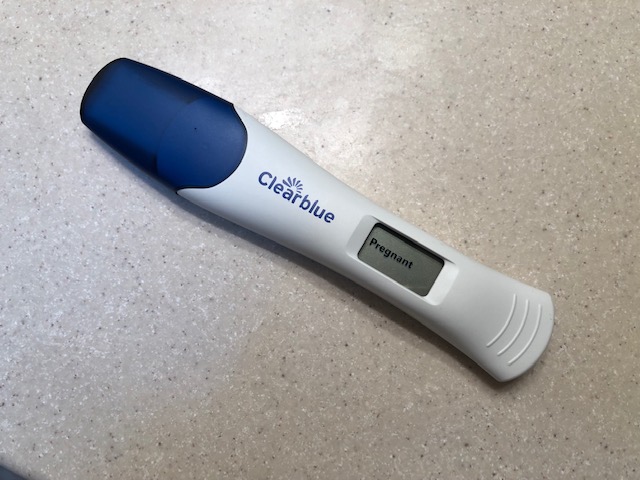 I stayed in the bathroom for a while thinking “Omg! What do I do?! Am I ready for this?! Okay. Should I tell him now? No. He loves surprises. Okay. What should I do? Bake him a cake that looks like a uterus and put a baby inside it? No. Too obvious. Why don’t my pants fit already? Oh shit. What if it’s twins?! Be cool, Chelsea. Be. Cool.”

I hid the pregnancy test in my nightstand drawer because it’s filled with odds and ends and completely stresses out my husband. I knew he wouldn’t look in there. I walked back out to the living room with a slight grin on my face and he said, “What are you so happy about?” (which he has no memory of saying) and I replied, “Oh, nothing. I love our family and our life.” He thought nothing of this because he says this randomly always.

I had a very sleepless night because I kept going back and forth about how to tell him or to blurt it out randomly. I decided that a “big sister” t-shirt would be involved. I thought about putting Atlas in it and her walking out to him but then I figured I’d rather it be the two of us (toddlers are too unpredictable).

After I dropped Atlas off at school, I giddily drove to Target in search of the ‘big sister’ t-shirts I’d seen around there before. I searched and searched but couldn’t find any. I finally asked someone and she said, “Oh, we don’t carry those anymore. Sorry.”

I almost ran to the freezer section, popped open a pint of ice cream, sat down and cried because THIS WASN’T PART OF THE PLAN.

Instead, I walked through more of the kids clothing and randomly, I mean like hung on the rack with baby shoes, was a size 5 t-shirt that said “BIG SISTER.” At first I thought it was a mirage but turns out it was the real deal! Thanks universe.

I grabbed like it was black Friday and everyone was about to fight over it (I was alone) and then bought these adorable pajamas for Atlas: 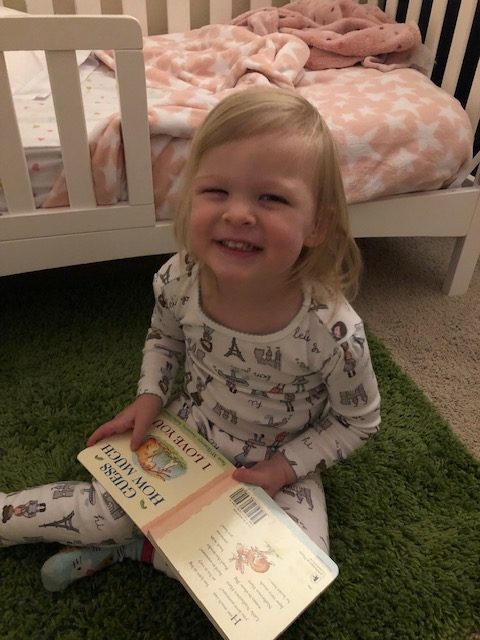 In the car, I folded up the travel PJs and then stuck the pregnancy test inside the ‘Big Sister’ shirt and place them back in the Target bag. I took a few deep breathes and walked inside to my husband saying “Okay Okay! Take another pregnancy test! Let’s go!”

I told him that I totally would but first I wanted to show him all the cute things I got from Target for Atlas. This is something I do anyway so it wasn’t weird. I took out the prepared stack and he loooved the PJs then he saw the shirt that said “Big Sister” and his face was priceless. He looked up at me with tears in his eyes and said “Are you serious?! Are you pregnant?!” Then we cried and kissed and were grateful and excited together.

We waited to tell Atlas because she would’ve totally blabbed.

When we decided it was time to share the news with our families, we put her 5t “Big Sister” t-shirt on, which fits perfectly because children’s clothing sizes are ridiculous. Then she would strut out it in front of our families, waiting for them to read it! Not gonna lie…it took everyone (except Hanna) a whiiiiile before they noticed what her shirt said. It was funny. 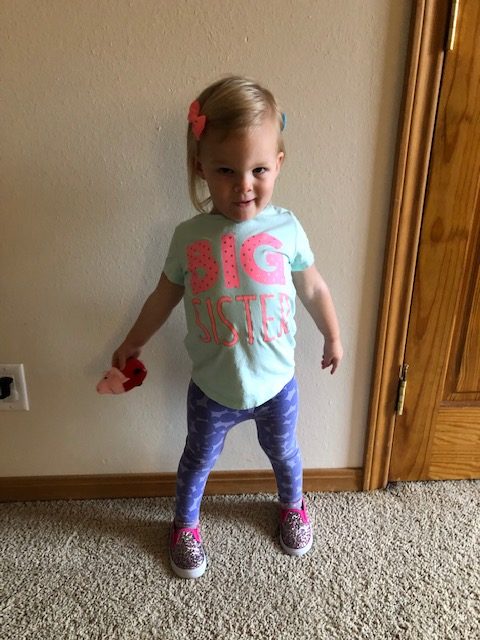 We shared the news with my family the week before Thanksgiving and then with Ryan’s family when we were snowed in up at the cabin for the holiday! 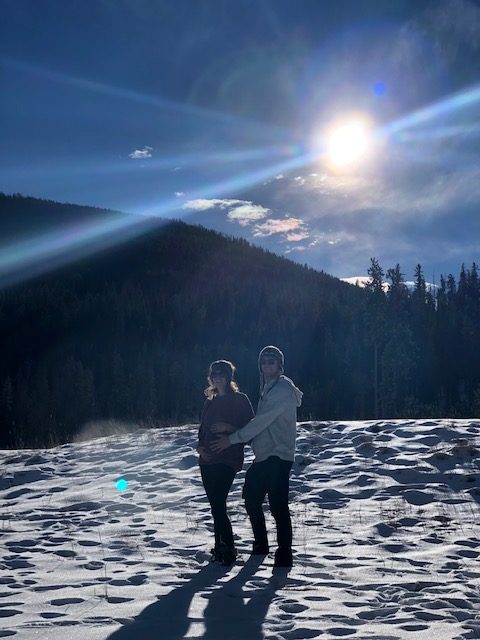 I enjoyed a nice few weeks of not feeling like absolute garbage and it was extra fun coming up with how to announce our second pregnancy! 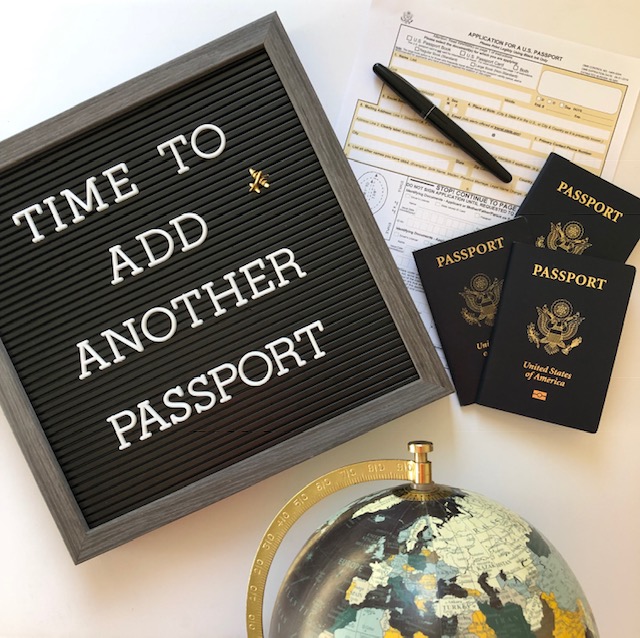 We are enjoying the last few months as a family of three and I’ll be back next week with updates from our first week in Australia! 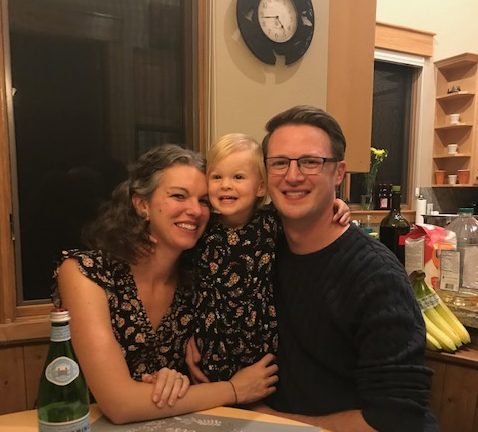